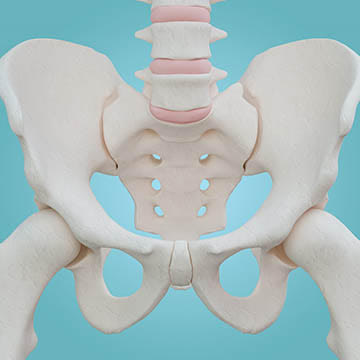 The following conditions are associated with pelvic floor disorders:

Many women with a rectocele report that to have a successful bowel movement, they must insert a finger into the vagina and press on the puborectalis muscle to straighten the angle of the rectum and facilitate emptying.

Pelvic floor disorders are caused by many factors that weaken the pelvic floor muscles, including:

Neurological conditions, such as multiple sclerosis (MS) can also cause pelvic floor disorders, because the signals to the brain that are involved in defecation can get disrupted, interfering with muscular relaxation. Spinal cord injuries, strokes, and Parkinson’s can all contribute to developing a pelvic floor disorder.

Diagnosing a pelvic floor disorder often involves nothing more than a thorough rectal exam (a gloved finger is inserted into the rectum to assess physiological problems with the pelvic floor musculature). Yet some individuals may need a more in-depth investigation, which may include any of the following medical test:

Because weakened pelvic floor muscles cause pelvic floor disorders, strengthening these muscles, as well as establishing a strong mind-body connection to contract and relax these muscles, are the most important steps in treating the condition. Kegel exercises to strengthen the pelvic muscles, as well as exercises that strengthen the core and pelvic musculature, and biofeedback to re-establish the mind-body connection of muscular contractibility and relaxation, are the most effective treatments.

Although some pelvic floor disorders are more serious and will require surgery, it’s always wise to consider trying strengthening exercises and biofeedback before considering surgery as an option.